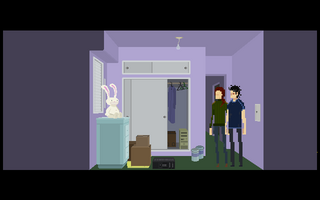 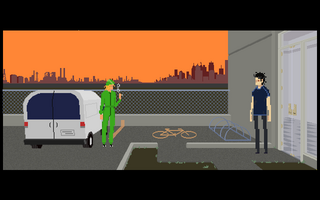 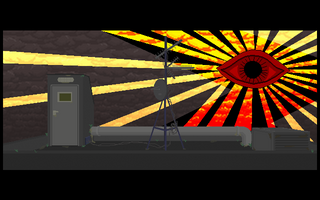 Personal Rocket, a tale of paranoia and loneliness, the evils of capitalism and too much web surfing, like many indie games, took about 10 years of development, went through many waves of abandonment, and will never give us any money (most probably).

Falzone (the writer) and I (the dev) started thinking about this project when we were in university, in a country we tend to call the ass of the world. We had spare time, but no money, internet or pretty much anything. As two fans of both Thomas Pynchon and old school adventure games, it was always our dream to have make weird, story heavy games. That's how Orbis Tertius, our studio (or whatever), was born, with the name as a reference to the fact that we come from a third world (orbis tertius) country, and Jorge Luis Borges, another citizen of the ass of the world.

We had many game ideas (we still have them in a neat .txt file in backup cds), but Personal Rocket is the first to see the light, even if it's just a demo for now. Personal Rocket was the game we wanted to do to see if we could actually make a game, so we faced the design process in a very pragmatic way.

Before writing anything, or even knowing what the game was going to be about, we played a few indie adventure games, the most notable being The Shivah, from Dave Gilbert (sorry for all the pirating Mr Gilbert, we were really poor). We analyzed them to learn a bit about structuring the story into a short game, seeing what worked and what didn't. More specifically, we counted how many backgrounds, character and "puzzles" where in each game. We also chose the Adventure Game Studio engine to develop our game, since, again, The Shivah was looking good enough for us, and it was developed with that tool too.

Then we simply chose a theme, the paranoia, and started writing the ideas. By this time I had already left the coziness of our small university town and was living in the city of fury, working as a software developer and joining protests almost every day. I remember sending some loose ideas about the story by email to Falzone, and receiving back a document called "the very best game ever in the world", with what is essentially the game we have today.

With the story more or less decided upon, I started working on the puzzle aspects of the game. I basically built a graph with items we would need to unlock stuff, and where to get them. My favourite one, sending the email through the command line, is inspired by the other games of Wadjet Eye, that always have some kind of interaction with machines, I love those puzzles.

The graphics are a horse of a different color. Neither Falzone nor I can draw, much less animate. The first version of the game (that no one will ever see) was drawn by a friend called Camilo. He's the best graphic designer I've ever worked with, but life took us in different paths, and we ended up back with no way of finishing the game. Of course, no one was getting paid here, but we considered briefly to get a freelancer to do the work for us.

But then something else happened, I took a job in Antarctica. For about 15 months I was living among seals and blue ice. No, I did not find the entrance to the center of the hollow world, and neither I am now the thing (or am I?). The antarctic winter lasts for about 4 months, and the sun never rises during the whole thing. It gets kinda depressing, so you need to find something to obsess over and forget that you confined yourself in a frozen island. My obsessions were Battlestar Galactica and learning how to do pixel art by following tumblr tutorials. The current art and animations in the game are the products of this.

For some reason though, we didn't work on the game while I was in Antarctica, and neither after I returned. It took me moving to another country and finding myself again isolated from the world, this time by language and shitty internet. Falzone was also able to escape the crisis brewing in the ass of the world. The release of our game (even if it's just the demo) is a big milestone for us.

For all the indies and amateur devs out there, stay strong, and stay free!

A tale of paranoia and loneliness, the evils of capitalism and too much web surfing.

Incrediblue! You followed through!
Congratulation on reaching this point.

I am super glad for this milestone! brewed by years of suffering in the ass of the world, the same way you escaped so did the game.

That's quite a story. Congratulations on making it this far and putting this out there in the world. I'll play it over the weekend. ^_^